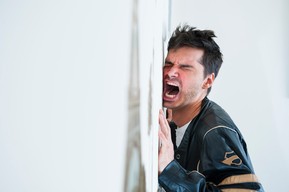 I had been rejected again. Bob told me to leave and that I wouldn’t need to finish out my two weeks notice. I was jobless. Apart of the US Bureau of Labor Statistics statistics blah blah blah.

Then I suddenly became deranged and actually thought about owning a fleet of 18 wheelers because I thought I was good at logistics. What does logistics even mean?

I went to truck driving school for Swift to get my CDL. Because in order to own a fleet of 18 wheelers you need to know how to drive one. My flawed logic.  I had to take a Greyhound bus from Northern Michigan to Memphis. Worst trip of my life. I cried.

I was there for 3 weeks. I think. I barely graduated. My truck driver trainer called me “Nervous” in this strange down home brother like accent. I was nervous and now it was my nickname.

I was sent back to Detroit to await my driving assignments while living in a motel. All I did was eat fast food and watch TV for 10-12 hours a day. I gained weight.

My 18 wheeler business dream ended in 3 months. I couldn’t hang living in rest stops and sleeping in the back of trucks. You take showers in scary places and eat out of vending machines. There are no Whole Foods for truck drivers. Great business idea!

I told Swift that they could have their truck back but they wanted thousands of dollars for teaching me how to drive their truck. I disagreed with them.

I was now jobless. I use to sell cars and was pretty good at it. I had a reputation for selling the shit out of cars. Every dealer I called gave me the runaround. I was doomed. I was freaking out.

I went to Manpower and got a factory job. Yes a job a robot could do ten times faster and more efficient. I would pick up plastic parts off of a conveyer belt and put them into a box for 8 hours a day and I would do it at night.

I was a professional salesman who couldn’t get back in the game. I was blacklisted. I would beg car guys to hire me. I would cry. I would dream about selling cars again. I was insane.

Then Robin, one of the best men I know, called back. He got me a gig selling cars. I cried. I finally get to check out of the insane asylum.

Ideas for coping with the insanity of a job search.

It really isn’t you it’s us

When any business is hiring somebody they get spooked out. They overthink the process. They don’t want to hire the wrong person and waste time and money firing them and then replacing them.

The boss loves to have as many resume options as possible for the job they need done. There is this belief that there is an over abundance of qualified people for the job and if you’re patient the right resume may come along.

Colleges don’t see their job as preparing you for finding a job. Their goal is to educate you and that’s it. Sure they have a career advisor you can talk to.

A college’s goal is to teach you to think critically. Your livelihood isn’t their problem. I’ve worked with recruiters with Masters Degrees that didn’t know how to recruit.

The best recruiter I know is a Marine. I don’t think he has a degree. Semper Fi baby!

I went to a networking event and interviewed some college kids who are all brilliant and smarter than me. But most of them were amateurs. They know how to study and do class projects. They also know how to party.

You and I live the real world. There are no As and Bs. It is get the job done or don’t pay the bills. Cars get repossessed and houses goes into foreclosure. We don’t have much margin for error.

Amateur hour in a job search is applying to jobs online blindly without knowing how to get through a window.

A pro doesn’t need to go through the front door of a company. They don’t want to because they know that there are a 1000 guards ready to smash you.

Submitting your resume with a cover letter to HR, blah blah blah puke I’m getting sick, is how an amatuer searches for a job.

Our applicant tracking system hates your resume and it will get lost. I’m sorry but your resume is one of a 1000 that company received this month.

Finding a window means knowing someone on the inside. Crawl through the window and stop the madness.

I’ll follow up with a part two with more job search strategies that helps me keep my sanity.

View all posts by Jason Barber